Are You Ready to Start Dating After Divorce?

Here are some things to think about as you ponder what may be the most awkward question facing you after a divorce.

Don’t be swayed by those pesky best intentions.  Despite the best intentions of your friends, relatives, work buddies and your mom (especially your mom!), only you can decide when it’s time to start dating again after you’ve gone through a divorce.

Wade into the shallow end of the pool first.  Dating, especially if you are coming out of a long-term marriage, can take some time to figure out.

Keep in mind that you’re not the same person you were before you were married and that means the old rules may not apply.

There’s plenty of time to dive headfirst into the deep end of the relationship pool later on.

When you’re first starting out, just dip your toes in the shallow end of the pool.

Don’t settle for a hamburger.  Coming out of a divorce, your self-esteem may have taken a hit and you’re going to be a bit vulnerable.

You may be tempted to lower your standards in what you want in a relationship as a way to validate your worth as a person and quite frankly, to avoid those intense feelings of loneliness that may plague you more frequently than you’d like.

Set some boundaries in what you want from another person and stick to them.  Be reasonable though!

Don’t settle for a hamburger just because you’re hungry.  You may be missing out on a nice prime rib of a relationship if you do.

To app or not to app, that is the question.  If you’re older and have been out of the dating scene for quite some time, you may have certain ideas about how to meet singles.  In the past, church, as part of a volunteer group, bar-hopping, a set-up by friends, or even a chance meeting at the grocery store just might land you the mate of your dreams.

But in a thoroughly modern world, times and technology have changed.

Online dating websites and applications have dramatically reshaped how people meet and start dating.  Yes, there are some challenges associated with going through a service like Match.com, Plenty of Fish or Zoosk, but on the whole, you will be able to meet a lot of great people with a lot less effort than ever before if you’re willing to go that route.

Because it’s less personal, don’t get too bent or take it personally if you reach out and someone doesn’t respond to you.

Keep in mind people have their own expectations and realities they’re dealing with and expecting someone to get a full picture of you from a couple of small pictures online simply doesn’t work without flaws or being a bit messy.

People will fudge online and you’ll have to be careful when making sure in-person reality jibes with online reality.

But the truth of the matter is, you face those same concerns by meeting people and dating the old fashioned way.  In some ways online screening is better because you don’t have to physically meet someone to have them pass your initial tests for compatibility.

Still, it remains a personal choice, and there are those among the divorced who prefer a more natural and organic path to a relationship.  And that’s just fine, too.

Get your group on.  One way to ease into meeting people and start dating again is to opt for taking part in group activities, many designed specifically for active singles.

Enjoying a hike, a trip to a museum, or a wine or food-tasting tour can be a great low-pressure alternative to going at dating one-on-one, especially if you’re a little freaked out because you’re just starting out.

Don’t lose your head and jump straight into bed.  If you have needs and desires, you may completely ignore this piece of advice.

The feeling of a new and romantic relationship can be exhilarating, especially if your new-found friend sparks that “something” inside of you to become a friend with benefits.

Don’t overthink it, but don’t under think it either.

Revenge sex and rebound sex are powerful forces, but much like the Force in Star Wars, they can come with either a dark side or a light side.

Don’t use sex as a weapon, and don’t allow it to be used against you either.  If you feel pressured, then just like when you were first starting out, the time is probably not quite right to take it to the next level.

On the practical side, sex is still sex and all that it implies.  Take precautions for birth control and protect yourself from STDs.  You do not want a relationship that keeps giving long after the relationship may be over.  Heck, you’ve got a divorce that’s probably doing it for you anyway.

Big advice on small talk.  If you’re going on a first date avoid talking about these things:  your ex, politics, bashing your job, bragging or nagging about money, and negatives about your children.

If you’re going on a first date try talking about these things instead:  art, music, travel, bucket list items, work (on a limited basis), hobbies, positives about your children.

Even better than talking, try being a good listener.  There’s a reason why we were given two ears and only one mouth.

The uh-ohs.  They aren’t complete relationship killers, but there are several red flags you need to watch for when dating.

Alcohol abuse, a mean streak, lying, a foul mouth, drug abuse.  This is not to say that if you’re 420 friendly and you meet someone who is also 420 friendly that you can’t have a good relationship with that shared interest.

Just make sure that whatever vices your new friend has that they don’t overtake the ability to be a polite and respectful human being.

When your gut talks, listen to it.  You’ll know.  You may not want to know, but you’ll know.  When your intuition kicks in, listen to what it has to say.  It doesn’t have to be a relationship breaker but give it credence and pay more attention to those prickly points of possible pain.

Rationalizing someone’s bad behavior for whatever reason is irrational, whether you see it or not.

Better to step away early when those red flags fly.

Relationships can be child’s play.  When you or a potential suitor have children, you’ve got to make allowances for how a new relationship in their lives will impact them.

Remember, kids generally have worse coping skills than adults, and you are making several critical decisions as you raise your children.  That includes who you allow into your life.

Understand that putting children first in your life, or in your new friend’s life is a positive thing that speaks to their ability to form a close relationship with people they care about the most, and that they take an important responsibility with the right amount of care.

It’s perfectly fine to talk about your kids on a date, but don’t monopolize the conversation with talk about them.  Remember, the person across the table is also there to get to know you better.  Don’t let your kids completely define who you are, but acknowledge their importance in your life.

So if your date gets canceled at the last minute because of a sick child, a “minor” emergency of any kind, or anything related to children in the other person’s life…give them a pass.

Also understand that even if things are going well in a new relationship, kids may not accept you at first no matter how nice you are.

Rejection is a defense mechanism born from the pain of watching their mom and dad break up.

Give it time.  Be consistent.  Be nice.  Be a good listener.  The walls will come down…eventually.

You’re sure to have trust issues after a divorce. It’s no different for children.

Don’t be a “phoney.”  You may get away with having a phone glued to your ear and have carpal tunnel syndrome on your texting fingers, but for heaven’s sake, put that damn phone away when you’re on a date.

If you have children or a critical business call you’re waiting for, explain that you need to check on those things from time to time, but few things in life are more of a buzz kill when you’re getting to know someone than if you’re losing attention to the warm glow of a small screen.

It’s personal…until it’s not.  One of the odd things about dating again is that you’re expected to reveal a certain level of personal details about yourself so that you can see if there are any sparks between you and someone else.  Unveiling layers of emotions is much like peeling back the layers of an onion.  It can taste good, but an onion can also make you cry.

Dating is all about percentages and you have to accept the fact that no matter how perfect you may be, you may not be perfect for the person you’re dating now.  That’s the thrill, but it’s also the chill about a new relationship.

Your new companion may decide there’s no spark there for no good reason.  Chemistry, and lack of chemistry, just happens.  Trying to rationalize attraction is a fool’s game.

You could chalk up a lack of interest to the other person’s low self-esteem, the much-vaunted “commitment issues” excuse, a lack of being ready to date, or emotional damage that hasn’t healed.  Remember, you’re trying to carve out a new path through the dating wilderness and that path isn’t always clear.

If things don’t work out, accept the results and move on.

An emotional makeover can be aided by a physical makeover.  It’s old advice, but it’s wise advice.  Get a new hairstyle.  Buy some new clothes.  Lose some weight.  Go to the gym.  Eat better.  Whatever it takes to look better in the mirror is going to help you look better on the inside too.

Keep a few cherished things that remind you of good times, especially those related to your children and your spouse, but when the things you own start owning you, it’s time for a decluttering exercise. 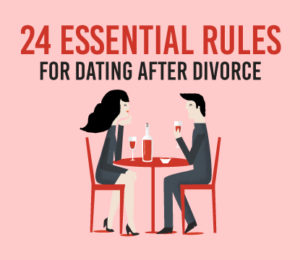 24 Essential Rules for Dating After Divorce 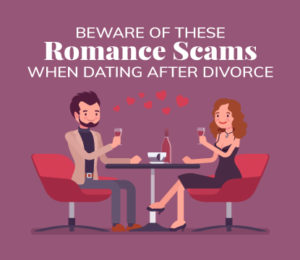 Romance Scams and the Dark Side of Dating After Divorce 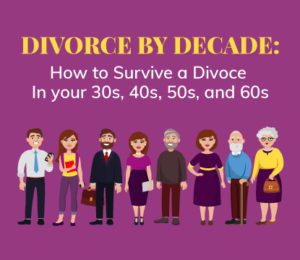