Sep. 6, 2021
Contributions by:
Survive Divorce is reader-supported. Some links may be from our sponsors. Here’s how we make money.

Pensions can be valuable assets that provide an income stream for the rest of your life.

It goes without saying that mistakes can be costly…and they could even jeopardize your long-term financial security.

In this guide, I’ll walk you through how the value of a pension is calculated in a divorce and how to determine the marital property portion.

What are the first steps in calculating the value of a pension in a divorce?

The first thing that must be established is whether the retirement plan is a defined benefit or a defined contribution plan.

Once this is determined, then a valuation date must be established.

The value of a defined contribution plan is simply the account balance as of a given date.

However, the characterization of the account (community vs. separate property) requires a detailed tracing of the account from marriage through separation.

What is a defined contribution plan?

These funds are normally invested and when the employee retires, they either receive a lump sum payment of the amount in the account or the balance is converted to a monthly annuity that is payable for the lifetime of the employee.

Examples of defined contribution plans include:

What is a defined benefit plan?

A defined benefit plan provides a retired employee with monthly payments when they first retire through the remainder of their lives.

The amount is determined (defined) by a formula that is used by the plan.  Optional forms of payment which provide a monthly benefit beyond the participant’s lifetime are typically available.

What do I need to know about pension contributions that were made before I got married?

In most states and depending on the division of assets model that is followed, any pension contributions made before marriage might be considered separate property and not subject to distribution with a spouse.

Similarly, contributions made after a cut-off date would be considered separate property as well.

An actuary will determine what part of the account balance is attributed to the period of marriage and which should remain the sole property of the employee.

There are several methods of determining the portion of a defined contribution plan that accumulated during marriage.

Because account values change on a daily basis, determining exact values is not always a science.

Here are some of the ways that values during a marriage can be calculated:

The Segregation Method takes the account balance of the date of the marriage, plus all interest and investment growth that can be attributed to these funds and then subtracts that amount from the marriage cut-off date.

The difference in the two amounts is then used as the value of the account to be divided.

The Subtraction Method takes the balance of the account at the date of the marriage and subtracts that amount from the cut-off date.

The difference in the amounts is used as the value of the amount to be divided.

Using this method assumes that any growth in the pre-marital amount account balance is considered marital property.

There are only a few states that view this growth as marital property.

The Coverture Method takes the balance at the cut-off date and it is multiplied by a coverture fraction to determine the value of the account.

Of these three methods, the Segregation method is far and away the most complicated and requires significantly more documentation to determine characterization.

How does a coverture fraction work?

A coverture fraction is used by an appraiser to determine the amount of benefits earned during a marriage versus those that were earned outside of marriage.

The fraction is the portion of the benefits that were attributable to the marriage period.

By way of a simple example, if a person was married for 15 years while they were contributing to a pension, but overall they contributed 20 years to a pension, then the coverture fraction would be 15/20 or 75%.

This means that 75% of the pension value would be considered a marital asset.

The pension owner would keep the other $50,000 as a separate asset.

The coverture fraction mainly applies to defined benefit plans but can be used in estimating the marital interest in a defined contribution plan.

Actual calculations are much more precise, often times down to the day, but this gives you an idea of what to expect when a coverture fraction is discussed.

How is a cut-off date determined?

It varies.  The cut-off date refers to the actual date that marital property rights to a pension end.

It can be any agreed upon date by spouses as part of a settlement, or it can be the date of separation or the date of divorce.

Dates vary by state and laws may dictate what date must be used.

What is a partial or immediate offset?

It’s common for a pension to be one of the largest assets that needs to be divided during divorce.

A house or other investments may also be involved in a divorce that are also considered marital assets.

It’s possible to agree to trade your interest in one asset for a greater interest in some other asset. For instance, maybe your spouse wants to keep the family home in exchange for giving up their interest in your pension.

There’s a good chance that the values won’t be equal and therefore won’t match up in terms of equitable distribution.

If the equity in the marital home is worth less than the pension, then the spouse keeping the family home may still receive a portion of the pension, although that amount would not be 50%.

The exact amount would be a part of the settlement decree and would be used as the basis for completing a Qualified Domestic Relations Order (QDRO) used to split a pension.

To obtain an immediate offset an actuarial valuation must be done.

What is an actuarial pension valuation?

To be able to complete an immediate offset, you must know the current value of the pension that is involved as a marital asset.

The actuarial valuation determines what the current value is of a defined benefit pension for this purpose.

Keep in mind that the actuarial valuation is a pre-tax valuation. So be sure you’re comparing apples to apples.

What are the different methods for determining the actuarial valuation of a defined benefit pension plan?

In states governed by equitable distribution laws in a divorce, there are three commonly recognized methods for determining the actuarial present value of a defined benefit plan.

The PBGC Actuarial and Mortality Tables Method uses the Group Annuity Mortality (GAM) 83 Tables to measure the employee’s projected lifespan, and the interest rates published and used by the Pension Benefit Guaranty Corporation as discount rates.

The GATT Method uses the GAM 83 Mortality Tables to measure the employee’s projected lifespan, and the 30-Year Treasury Bond rate as a discount rate.

The IRC 417 Method uses the RP-2014 Mortality Tables (including mortality projection scales) to measure the employee’s projected lifespan, and “Segment Rates” as set forth in IRC 417(e)(3)

The differences in these methods stem from the tables used to measure the projected lifespan and the interest rates used to discount to present value.

All are accepted by courts of law but one method may be preferred over the others depending on your jurisdiction.

How does deferred distribution work?

In contrast to a partial or immediate offset, deferred distribution of a pension provides for the division of pension benefits to take place at a later date.

This usually occurs when benefits are actually being paid by the plan.

It is not necessary to determine the value of the pension benefit at the time of the divorce, as long as the provision for deferred distribution is explicitly stated in the QDRO.

Is it possible for different appraisers to reach different conclusions about the values of a pension benefit?

When different assumption methods and dates are used, the final values can be different.

For example, some variable assumptions can include the cut-off date, vesting status, whether cost of living adjustments (COLAs) are included, what valuation date is used, anticipated retirement age and what method of valuation is used.

What documents are needed for a pension valuation or distribution?

You will need many of the following documents to prepare for a valuation or distribution:

How are disability pensions treated in a divorce?

It depends on the laws of the state where you get divorced.  In some cases, disability pension benefits are treated as separate property.

In other states, they are considered marital property and subject to a division of assets.

If you collect workers’ compensation benefits due to a workplace injury while you were married, there’s good chance those payments will be considered income and therefore marital property that can be used when calculating child support and alimony payments.

Some states may break down the award if portions are meant to cover future medical expenses or compensation.

In those cases, certain amounts of the award will be treated as the disabled spouse’s separate property.

If you’re 62 years or over, you may have been receiving your spouse’s SSDI benefits while you were married. This payment won’t end upon divorce unless:

If your disabled former spouse dies, you may still be eligible for SSDI survivor benefits. To qualify, you must meet the following requirements:

Are all pensions governed by the same laws?

No.  In 1974, Congress passed the Employee Retirement Income Security Act (ERISA), which subjected pensions to government regulation. In particular, a company’s contributions to a plan and the growth on those contributions are tax-free under ERISA as long as the plan maintains tax-favorable status.

Similar provisions are embodied in the Internal Revenue Code.

Looking for more great divorce financial guides? Check out a few of our favorite resources: 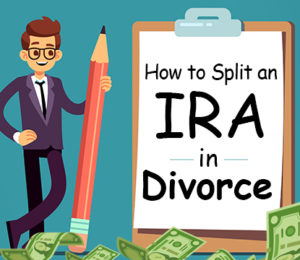 How to Split an IRA in Divorce 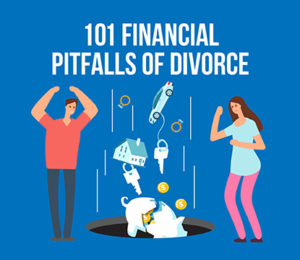 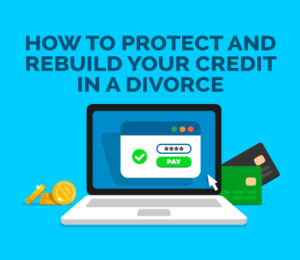 How to Protect and Rebuild Your Credit in a Divorce