Learn how child custody is determined in Massachusetts and how to modify custody orders.

Jul. 8, 2022
Survive Divorce is reader-supported. Some links may be from our sponsors. Here’s how we make money.

If you’re getting divorced in Massachusetts and have minor children, you will need to deal with child custody issues before your divorce is final.

Here’s what you need to know to help you through the process.

Types of Child Custody in Massachusetts

Legal custody refers to a parent’s authority to participate in major decisions regarding a minor child’s education, health care, and emotional, moral, or religious development.

Physical custody is when a minor child lives with or is under a parent’s care and supervision.

In both cases, Massachusetts courts can award sole custody or joint legal or physical custody, or a combination of both.

Shared physical custody does not mean an equal division of time between parents. It’s common for parents to share legal custody while one parent remains the primary custodial parent. When a judge awards one parent physical custody, they will create a parenting time schedule for the other parent to ensure a continuing quality relationship.

The judge always places a child’s best interests first in a custody case, so a parenting time schedule will be approved if it works for the family and meets the child’s needs.

Read More: The Ultimate Guide to a Do-It-Yourself (DIY) Divorce

How is Child Custody Determined in Massachusetts?

If the court awards sole physical custody to one parent, the judge will create a parenting time or visitation schedule for the non-custodial parent and the child.

Visitation orders outline the minimum amount of time a non-custodial parent can spend with the child.

Parents who are married share legal and physical custody of the children unless and until a court orders otherwise.

When the parents are not married, the mother has sole legal and physical custody unless and until a court orders otherwise. A father must prove paternity through a formal acknowledgment or a DNA paternity test to gain custody rights.

Paternity creates a legal relationship between a father and his child, giving the father rights to:

If the mother and the father are married, the husband is the child’s legal father. As soon as your child is born, they have all these rights, benefits, and opportunities.

A court may order supervised visits or no visitation as a means of protecting a child. That is often the case when abandonment, substance abuse, or domestic violence are part of the family dynamics.

Massachusetts child custody laws state that when making a visitation order for an abusive parent, the court may consider:

In some rare situations, it may be in the child’s best interest not to have contact with one of the parents. For example, if the parent has abused a child, a supervised visit arrangement would traumatize the child.

In a custody dispute between the child’s parents, custody orders are based on what it decides is in “the best interests of the child.”

Suppose the court finds a pattern of abuse or a serious incident of abuse. In that case, a rebuttable presumption assumes it is not in the child’s best interest to be placed in sole legal or physical custody, shared legal custody, or shared physical custody with the abusive parent.

Also, Massachusetts law explicitly prohibits a judge from awarding any visitation rights to a parent who has been convicted of first-degree murder of the other parent unless the child is old enough to agree to the visitation and the child’s legal guardian also agrees to the visitation.

Factors a Massachusetts Judge Must use When Deciding Custody

When parents do not reach an agreement on child custody, the court must decide the issue. All major decisions related to child custody center around the best interest of the child

Massachusetts law doesn’t list specific factors for judges to consider. Instead, all courts must evaluate the child’s health, safety, and general wellbeing as a primary consideration.

Some of the common factors a family court considers may include:

Usually, the court will make a “parenting time” order when the minor children live most of the time with one of the parents. This parenting plan goes into great detail to define the rights and responsibilities of each parent.

Sometimes, parents work together to create these plans. If there are disagreements, the court will decide instead.

A court will generally adopt a plan created by parents unless it is contrary to a child’s best interest. If either parent seeks permanent joint legal or physical custody and the other parent objects, each parent must submit a parenting plan to the court.

At a minimum, the proposed plans must include:

If parents have established quality communication, sometimes they do not need a visitation schedule. Instead, parents will leave visitation flexible and arrange visits between themselves. In visitation agreements and court orders, this is referred to as “reasonable visitation.”

The court may accept or modify a plan submitted by one parent or both parents. A judge may reject the proposed plans and order a different parenting arrangement.

To increase the chances of a modification being approved by the courts, both parents should try to work together.

If you can’t agree, the court will consider a motion to modify custody if the requestor can prove both of the following factors exist:

When something happens that puts your child’s health or safety in danger after the court issued a temporary custody order, and you need to change the order immediately, you can file a Motion to Modify Temporary Custody Order.

Suppose something happened that puts your child’s health or safety in danger after the court issued a final custody order, and you need to change the order right away. In that case, you can file a Complaint about Modification and a Motion to Modify Custody Order.

If you need to change the custody order immediately because of domestic violence, you can file a 209A Complaint for Protection from Abuse.

Do grandparents have any custody rights in Massachusetts?

When parents cannot take care of their child third party may step in and provide the requisite care. Sometimes, appointing a caregiver or a guardian means going to court, but there are also ways a person can become a child’s caregiver that does not involve going to court:

There are also two ways a person can become a child’s guardian that does not involve going to court:

Can a custodial parent move to another part of the state or another state?

You must show the move is in the child’s best interests taking into account all legally relevant factors such as:

If you are still married but separated and have not been to court, you and your spouse share custody of the child under Massachusetts law. That means it is lawful for either parent to remove the child from the state.

Where parents do not have a custody decision, removing a child without permission may contribute to the other parent being awarded custody.

Removing a child on your own, without the agreement of a parent with whom you share custody or a judge’s permission, might violate the other parent’s shared custody rights. A judge could see that as acting against the child’s best interests.

If you are a domestic violence victim, you may need to leave your community or the state quickly in order to be safe. If it is at all possible, you should still consult with an attorney before you go. You may be able to obtain a restraining order that includes temporary custody and permission to remove the child from Massachusetts, as essential to the child’s being safe.

If you are unsure about whether your situation requires getting consent from the other parent or whether you need to get permission from a judge, you should consult an attorney.

How much influence does a child have in deciding which parent to live with?

Part of this is because courts recognize that when parents are in conflict, a child’s preference is often unreliable and may be due to undue influence by one parent.

Officially, children can’t decide where they will live until they are at least 18 years old.

Does Massachusetts favor mothers over fathers in custody cases?

There is no preferential treatment for a mother in Massachusetts custody cases. A father has equal custody and visitation rights. Gender is a non-issue, all other factors being equal. 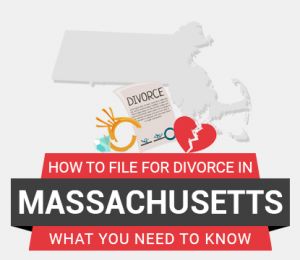 How to File For Divorce in Massachusetts